A United States Financial Technology (Fintech) corporation with $2B in assets sought a legal opinion on the tax implications related to a Canadian entity. Research was conducted accordingly and eventually we created and implemented the Canadian corporation.

A client’s successful business was subjected to a Net Worth Audit, which the Tax Court of Canada refers to as a “blunt instrument.”

The business accounting books and records were in poor shape and the client used bank accounts for both personal and business transactions, in significant amounts. The auditor reviewed the client’s records and bank accounts and decided to assume that all business income that flowed through a personal account was attributed directly to her. She reported $70,000 in income that year.

Nevertheless, CRA increased her personal income by over $2,600,000, relying on the assumption that all the funds that streamed in and out of a personal account were paid directly to her. Any experienced Tax Lawyer or Accountant will tell you that punitive inflated audit outcomes such as this are not uncommon, especially if the taxpayer is unrepresented.

A Tax Lawyer disputed the Net Worth Audit tax assessment. A Notice of Objection was filed in an effort to convince a CRA Appeals Officer that the auditor’s accounting was indefensible in court.

It took over a year of back-and-forth written submissions with the Appeals Officer and the Team Leader. Eventually, CRA was persuaded to reverse the audit assessment, saving the client’s business without having to appeal to the Tax Court of Canada.

If the inflated assessment wasn’t appealed, the client would have lost her business due to CRA collections actions making it impossible for her to function (e.g. seizing bank accounts or operating lines of credit). Or she would have been forced into bankruptcy. Either way a successful business and jobs would have been destroyed for naught. 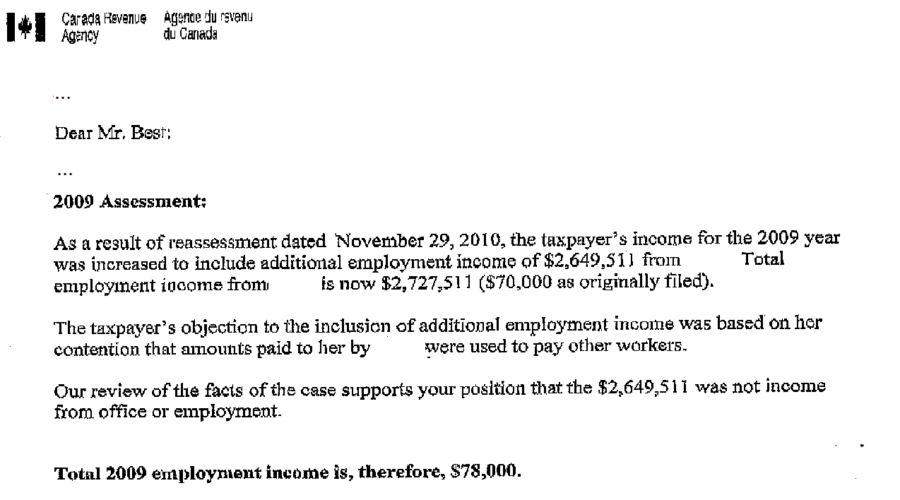 A Director of a corporation can be held jointly liable for tax debts of the corporation under certain conditions. One being that a Director must be assessed within 2 years of resignation.

Once retained, we immediately requested additional time to provide our rebuttal to the threatened assessment. We subsequently reviewed the facts and related documents provided by the client and the disclosure provided by CRA upon request. We were able to prove that the client had resigned more than 2 years prior and could not be held liable for the outstanding debt of the corporation.

The corporation conducted innovative work but a significant portion of their SR&ED tax credit claim was denied in this particular year. The client was technically advanced and handled the audit without representation. However, about 50% of their claim was denied after audit.

We were retained to appeal the SR&ED claim denial in the Tax Court of Canada. To do that we first filed a Notice of Objection and 90 days following we filed a Tax Court Appeal. We drafted and submitted highly technical pleadings and the appeal was settled very early, before discoveries. In subsequent years, the client’s SR&ED tax credit claims were accepted as filed without audit.

A Director of a corporation can be held liable for tax debts of a corporation under certain conditions. One being that a Director must be assessed within 2 years of resignation. In this case, CRA had already assessed the former Director for the outstanding tax debt of the corporation.

Therefore, it was necessary to file a Notice of Objection in order to dispute the assessment with a CRA Appeals Officer. We were able to establish that our client was no longer a Director of the corporation using various legal arguments and supporting evidence.